The Story of the Dresden Trust

It began with a cheque for £10, which opened the Dresden Trust’s new bank account. And it was signed by ​John Beale​, one of its first trustees in 1993. This article celebrates the varied and accomplished trustees who steered the Trust through many of its most important projects. Beale himself was a successful businessman - founder of the historically-themed gift retailer Past Times​ - who had developed a fascination with Germany as a schoolboy. As a sixth-former he watched preliminary work on creating the Berlin Wall; he visited Dresden for the first time 30 years later, soon after German unification.

He was one of the three people present at the first Trust meeting which discussed fund-raising. The others were ​Dr Alan Russell​ and ​Canon Paul Oestreicher​, director of Coventry Cathedral’s Centre for International Reconciliation, who had also become trustees in 1993; both had also demonstrated - silently but publicly - against the erection of the statue to ‘Bomber’ Harris in London a year earlier.

John Beale used his company’s resources to produce the first leaflets to inform people in Britain about the Trust’s aims and to persuade them to contribute. This was when its first logo was adopted - the silhouette in half black, half white of the ruined Frauenkirche, the reconstruction of which gave the Trust its first major project.

The need to accelerate fund-raising soon became clear and the person who could achieve it was the next recruit to join the trustees, in 1994. This was ​Tim Everard ​CMG, who had been UK ambassador to the German Democratic Republic (GDR) from 1984-88. He, with Russell and Oestreicher, made the Trust’s first official visit to Dresden in 1994 to meet civic and state leaders and those in charge of the Frauenkirche rebuilding.

Through diplomatic and commercial channels with which he was very familiar, Tim Everard set about appealing for funds to the business community, which had more trading contacts with Germany than with any other single country.

The response was good and many of the companies were represented at a gala dinner, organised by Everard, at St James’s Palace in 1995, presided over by HRH The Duke of Kent (then, as now, the Trust’s royal patron) and with Saxony’s Minister President, Professor Dr Kurt Biedenkopf, as guest of honour.
John Major’s government was represented by Foreign Office minister Linda Chalker MP (now Baroness Chalker), who had a keen interest in Germany (she had studied at Heidelberg University) and later became a Trust patron. It was on this occasion that the Duke announced HM The Queen’s generous personal gift to the Trust and the British government’s donation of £50,000.

In addition to these amounts, the first dinner raised £45,000; the second, in 1998, £55,000. The Trust had soon raised about 50% of the sum then estimated for the making and delivery of the Frauenkirche orb and cross. Eventually this rose, through many individual donations and fund-raising events such as concerts, to the equivalent of 1.5 million euros.

Three more trustees joined the board in 1994. The first was ​Wing Commander Peter Johnson​, for whom, as a former member of the elite band of Pathfinders in Bomber Command, the obliteration of Dresden was a particularly painful memory. In his book ​The Withered Garland: Reflections and Doubts of a Bomber ​ (1995) he wrote that “the deliberate destruction of a city whose military value to the enemy seemed negligible” was “difficult to justify”. Sadly, he did not live to see the Frauenkirche’s completion.

He was joined by ​Dr Judith Purver​, a lecturer in German at Manchester University, and Tonie Smith​, a lay member of the Meissen Commission, a committee of German and English members overseeing relations between the German Evangelical Church, other protestant churches in Germany and the Church of England. She was involved in discussions which influenced the use of the rebuilt Frauenkirche as an ecumenical centre for peace and reconciliation, along the lines developed by Canon Oestreicher in Coventry.

The Trust having been invited to contribute the iconic orb and cross to surmount the 300ft high dome of the Frauenkirche, it recruited in 1995 a key member to its board in ​Peter Nardini​, an architect and university lecturer who later became the Trust’s vice-chairman and served until 2011.

As chairman of the Trust’s technical committee, Nardini worked tirelessly on the project, from early discussions in Dresden with Eberhard Burger, senior engineer in charge of the rebuilding, and Thomas Gottschlich, architectural consultant to the Frauenkirche team, to preparing technical specifications, engineering and detailed design drawings, to finding a British company - Grant Macdonald in London - capable of undertaking work of such international significance, to finally signing contracts in 1998.
But this was not Peter Nardini’s only contribution. He also oversaw the planning, realisation and inauguration of the British-German Friendship Garden at the National Memorial Arboretum in Staffordshire. He explained how this and the orb and cross project were accomplished in ​A Trust for Our Times ​ (see below). His work for the Trust earned him the OBE.

Two more distinguished trustees joined the board in 1997: ​Sir Nigel Broomfield ​KCMG, who had just retired as UK ambassador to the reunified Federal Republic of Germany and had previously succeeded Tim Everard as the UK’s last ambassador to the GDR, and Professor Wolfgang van Emden​, who returned to Dresden in 2000, with his Yorkshire-born wife Joan, for the first time since leaving it as a 6-year-old boy in 1937. He was movingly reunited with three septuagenarian ladies who remembered him from their childhood days. But, like Peter Johnson, he died before the Frauenkirche was completed.

At the turn of the century, and with the successful completion of the Fraunkirche’s crowning glory, the Trust’s attention turned to ways of promoting Anglo-German reconciliation through educational and cultural initiatives.

David Woodhead​ had first donated to the Trust in 1994, attended the presentation of the orb and cross in Dresden in February 2000, and then soon became a trustee (including two years as joint vice-chairman), serving until 2017.

Woodhead’s belief that reconciliation and friendship should be encouraged in particular by contacts between young people in Britain and Germany (who would hopefully avoid the mistakes of their forebears) led him to launch the ​Dresden Scholars’ Scheme ​ in 2001.

As National Director of the Independent Schools Information Service, he had direct access to the UK schools in which most private sector pupils were educated. He appealed to them ”to offer boys and girls from Saxony places free of charge or at much reduced cost for periods up to a year so that they can enjoy opportunities to experience life in a British boarding school ... make friendships with British students …. and encourage exchanges between schools in the UK and Saxony”.

Schools responded generously and Woodhead visited Dresden several times to promote the scheme to families and teachers (particularly at the city’s St Benno-Gymnasium). The scheme has enabled hundreds of boys and girls from schools in Dresden and elsewhere in Saxony to benefit from attending British schools at much reduced fees and, in many cases, to establish strong friendships. The host schools also benefit greatly from their attendance.

Cultural, and especially musical, links with Dresden were the particular interest of Margaret Steinitz​, artistic director of the London Bach Society, who joined the trustees in 2006 - as did the then ​Canon Justin ​(Portal)​ Welby​, at that time co-director of Coventry’s Centre for International Reconciliation before soon moving on to be Dean of Liverpool, Bishop of Durham and Archbishop of Canterbury. (His maternal grandfather was the half-brother of the wartime Chief of the Air Staff Sir Charles Portal.)

Two years later ​Anthony Sheridan ​joined the board and became its secretary (and, for two years, joint vice-chairman with David Woodhead). A businessman with long-standing links with Germany, including Dresden, and a strong interest in education (as a former chairman of Hertfordshire CC education committee), he is also a leading international expert on zoological gardens and author of authoritative books on Europe’s zoos.

Recalling that many animals, along with their keepers, were incinerated in the February 1945 firestorm, Anthony Sheridan made a generous gift of a gingko tree and commemorative plaque to Dresden’s famous Zoological Garden.

Another valuable addition to the board of trustees, in 2012, was ​Frank Woodgate​, who, as well as being a noted lecturer on art history, brought his much-needed professional skills as a retired banker and computer manager to the important role of treasurer.

This survey of past trustees having begun with a reference to money, it ends with another. It was testimony to the Trust’s work eventually capturing the public imagination in the late 1990s that a Heathrow taxi driver spontaneously handed one of the trustees a £10 note, saying that the destruction of Dresden had been “a very bad thing”.

The Trust engaged in many more activities and initiatives in the early years than those mentioned above. The full account is given in ​ “A Trust for Our Times: The Story of The Dresden Trust” ​by Alan Russell (with Peter Nardini and David Woodhead) and with a Foreword by HRH The Duke of Kent KG, published in 2015. 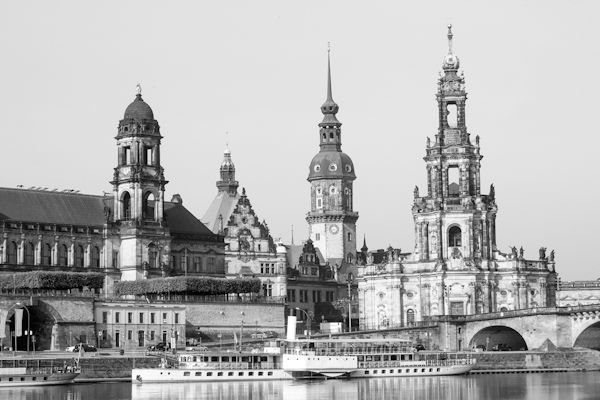