The Dresden Trust mounted a Travelling Exhibition. to inform the people of the United Kingdom about Dresden’s destruction and rebirth and to raise awareness of the Trust and of the proposed British contribution to the rebuilding of the Frauenkirche. As decided at the highest political level in Germany, the Trust was requested to make and to gift the great Orb and Cross which would eventually stand on the very pinnacle of the church. Grant Macdonald’s craftsmen were commissioned to make these using 18th century handwork skills. The contents of the Exhibition were written and designed by Alan Russell, Peter Nardini and John Soane and updated and collated with valuable help from Maria Nardini.

The Trust’s hope that the Exhibition would help to attract donations towards the making of the Orb and Cross, the financing of the fabric of the whole church and the inevitable administrative costs was amply fulfilled. Because of the security situation in Northern Ireland the Exhibition was not unfortunately able to go to Belfast; it did however go to over twenty cities in all other parts of the United Kingdom. Thirty two panels were prepared, of which seventeen are shown below along with examples of the posters which announced it. 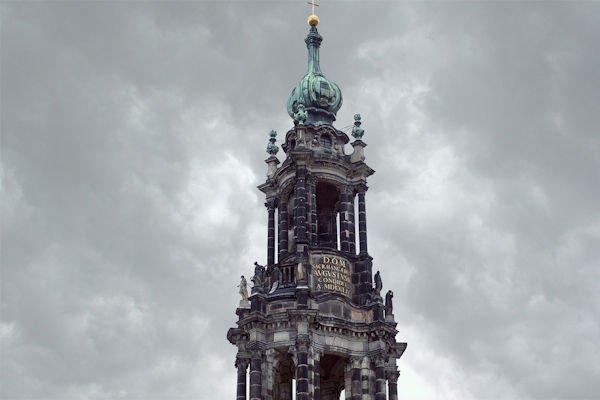