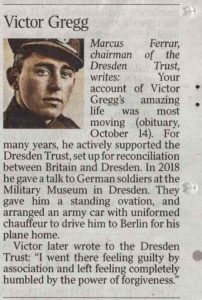 To say that Victor Gregg was in the wrong place at the wrong time on the night of February 13-14, 1945, would be to understate grievously. He, along with 400 other prisoners of war, was locked up in a makeshift jail in Dresden. As air-raid sirens started wailing outside the guards vanished, leaving the heavy doors chained shut. They were trapped.

Through a huge glass cupola above their heads the PoWs watched as red flares drifted down, looking like Christmas trees. They had been dropped by Bomber Command’s 83 Squadron, No 5 Pathfinder Group. Minutes later four incendiary bombs smashed through the glass roof, spraying burning phosphorus over the prisoners.

Gregg survived, lying pressed against a wall surrounded by men burning and screaming or injured by huge shards of flying glass. Towards the end of the raid, a 1,000lb bomb detonated outside the prison, blowing down a wall and killing many of the men inside. Gregg was hurled 50ft across the room. Temporarily blinded, dazed and concussed from the blast, he managed to stagger out of captivity and into the streets.

Surrounded by flames and collapsing buildings, and scarcely able to breath because of the heat, Gregg and several hundred civilians found temporary safety in a small park. That night turned out to be the start of a series of Allied raids that live on in controversy as British and American bombers returned to Dresden three more times, dropping nearly 4,000 tonnes of explosives. Before the raids had finished Gregg was dragooned into a rescue squad, working on the edge of the firestorm as bombs still fell all around.

He spent the next five days helping to open the air-raid shelters and looking for survivors. He found only four.
On the sixth day he escaped to the east and spent the last weeks of the war with the Soviet army.

Those days in Dresden scarred him deeply, remaining with him for the rest of his long life. He said that he was used to killing soldiers in battle but that nothing had prepared him for “the sight of women and children exploding in the heat or being sucked into the air with their heads on fire”.

In later life he wrote that the raid was a war crime that had made him ashamed to be British.

Victor James Gregg was the eldest of three children born in 1919 into poverty in King’s Cross, London. When the third child arrived his father, Edward, vanished, leaving his mother, Emily, a seamstress, to bring up the family on her own in two rooms in a slum.

Young Victor left the Cromer Street School at 14 and, after running wild among the criminal fringes of Soho for a few years, decided on his 18th birthday that a life in the army would be preferable to a life of crime. He signed on with the Rifle Brigade for 21 years.

His first taste of battle came at the end of 1940 at Beda Fomm in Libya’s Western Desert. The fighting went on for two days, during which the commanding officer called down fire on his own position to try and destroy the Italian tanks that were overrunning them. Gregg said it was at Beda Fomm that he learnt “the dark art of killing a man with my bare hands”.

In March 1942 he joined No 1 Demolition Squadron, “Popski’s Private Army”. His orders were to deliver secret intelligence documents for his commander, Major Vladimir “Popski” Peniakoff. The job taught him lessons about undercover work that he would draw upon in his postwar career.

In July that year he was seconded to the Long Range Desert Group, tasked with ferrying wounded men across the desert from behind enemy lines to medical units in the rear. Often alone, in a battered old two-wheel-drive Bedford truck, he drove thousands of miles. His technique for dealing with enemy aircraft, he recalled, was to drive his vehicle straight towards their line of flight, inviting them to dive at him and possibly crash, or leave him alone.
Gregg was in the front line at El Alamein in October 1942 with 2nd Rifle Brigade and during the first night of the battle his platoon lost three Bren gun carriers to mines and shellfire. A few days later the battalion occupied a position known as Snipe Ridge. They were attacked by German and Italian armour, which they managed to fight off with heavy loss, destroying 32 tanks and five self-propelled guns. After the Snipe action the commanding officer, Lieutenant-Colonel Vic Turner, was awarded the Victoria Cross.

The following year Gregg joined the 10th Battalion, Parachute Regiment. During training he and a few comrades learnt a new technique for getting rid of their chutes. The method was to release the harness at 100ft, hang on to the webbing and let go at ten feet, allowing the canopy to float away, attracting enemy fire. Gregg reckoned that this method saved his life when, on September 18, 1944, the second day of the ill-fated Operation Market Garden, he parachuted in to a drop zone eight miles to the west of Arnhem. Gregg recalled that “as we dropped you could hear all these enormous bangs and the whole area was covered in black smoke”. He had landed in the middle of a full-scale battle when the drop zone was supposed to be in British hands.

With 12 of his comrades dead, Gregg continued firing his Vickers machinegun until it ran out of ammunition, and then he was taken prisoner. He made two unsuccessful attempts to escape and ended up working in a soap factory, which he sabotaged by shorting the main electrical fuses. When the building burnt to the ground, Gregg was sentenced to death “for crimes against the Reich” and sent to nearby Dresden for execution. The sentence was due to be carried out the day after the Allied bombing raids began.

In June 1945, Gregg was repatriated. He hoped to serve out his term with the Rifle Brigade or Parachute Regiment but as he had been in contact with the Russians he was not allowed and instead put on the reserve, something which upset him a great deal. His reaction at the time was to reject any form of authority. He became subject to sudden fits of extreme violence and had nightmares that left him sweating and shouting, not knowing where he was.

He found escape in bicycle racing and was due to take part in the 1950 British Empire Games, now the Commonwealth Games, when he crashed, breaking his shoulder and ending his riding career. After this he joined the Communist Party and became an active, troublesome and effective trade unionist working in the building and transport industries.

In 1955 he joined the Moscow Narodny Bank, employed as a chauffeur to the chairman. In this role he found himself ferrying VIPs and carrying sensitive documents between various Russian cities. He was certain that one of his passengers one day was a British MP. Word of this reached MI6 and not long afterwards Gregg was recruited as an informant. After each trip thereafter he reported everything he saw to his British handlers.

Finding the long hours and periods away from home a strain, he eventually handed in his notice at the bank. This move came too late for Freda, whom he had married in 1943. The couple had three children: Alan became a taxi driver; David became a computer programmer; and the youngest, Judith, became a teacher. They are now all retired. After their divorce in 1970, Freda became a social worker. She died in 1989. 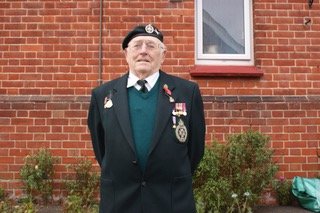