The Chalice and Paten

The Chalice and Paten

In 2005 The Dresden Trust determined that as a sign of its continuing relationship with the Frauenkirche, and as a symbol of future faith and hope, it would design and produce a silver Chalice and Paten as a gift and for use in communion services.

Peter Nardini worked with Grant MacDonald and Alan Smith to design and make two pieces, under the overall supervision of the Board of Trustees. The project began in mid 2005, design meetings were held and in keeping with the Trust’s philosophy, both Chalice and Paten were hand made of solid silver. The artwork expresses themes unique to the Frauenkirche, namely the bombing, the achievement of reconciliation, and of course the uniqueness of these events: flames to represent the conflagration which engulfed the city on the 14th of February 1945, linked hands to represent friendship and reconciliation between Britain and Germany, and finally 12 rubies around the neck of the chalice, representing each of the 12 Apostles. After several meetings the Board agreed the concept and ordered the making of the pieces to begin.

The Chalice and Patten are made from London Hallmarked silver. The Chalice weighs 914 grams and stands 24 cm in height and is lined with ‘Coventry Gold’. The Paten weighs 246 grams and is 18.5 cm in diameter.They are hand engraved with the following text

As with all hand raised art, the skill of the craftsmen was essential and again here as with the earlier Orb and Cross, Grant MacDonald’s craftsmen excelled themselves. The following photographs show the progress of the manufacture and the final glory of the pieces before their presentation to the Dresden Frauenkiche during a major Ecumenical service on the evening of the 30th October 2005. 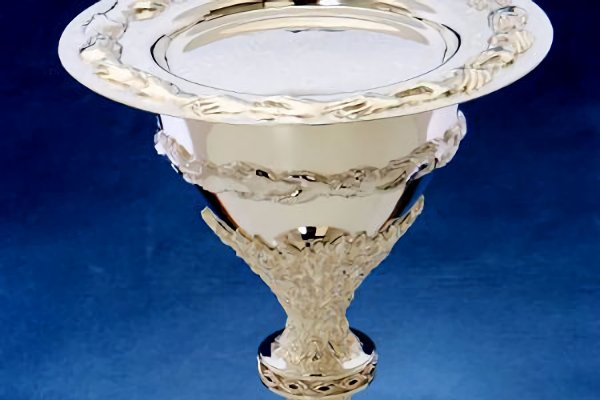