In  association with the British German Association and the National Memorial Arboretum in Alrewas, near Lichfield, the Trust planned a Friendship Garden. This was to have a strong Dresden motif, to celebrate the processes of reconciliation and peace, in a holistic setting accessible to the British people. It was to be situated close to UK memorials, the British-Japanese Garden and the moving Shot at Dawn remembrance of young men deemed in WWI to have deserted the Front.

Opened in 2005 by HRH the Duke of Kent, with a blessing by  the Bishop of Lichfield, the Garden consists of two circles of Silver Birches (some donated by German friends), an inner ring of original Frauenkirche Stones with the names of 9 British and German cities that suffered serious aerial damage in WWII. The inauguration was attended by up to 100 German guests.

In 2005 Dr Alan Russell originated the idea of creating a peace garden to promote reconciliation between Britain and Germany. This was conceived as a simple circleor circles of Silver birch trees with plaques recalling the significance of the site. The obvious location seemed to be the National Memorial Arboretum in Arlewas in Staffordshire, already established as a site of Commemoration of many British Army regiments, Royal Air Force and civilian services (Police, Fire Brigade and Ambulance):in 2006 the site changed hands and came under the ownership of the Royal British Legion. Shortly afterwards, it was decided that a new British Memorial should be built, to remember all those who as part of the nations armed and civilian services had given their lives since 1945. This required that the site of the British German Friendship garden be moved to an alternative location closer to the new British Armed Forces Memorial and be redesigned accordingly.

The Board of Trustees agreed the proposed new layout and placed its realisation in the hands of the National Memorial Arboretum and of the Trust’s Peter Nardini with the whole scheme being financed by the Dresden Trust and a small group of German friends. Slightly larger than the original, the new layout included a number of stones from the bombed and destroyed Frauenkirche in Dresden as a poignant reminder of what the Friendship Garden stood for. Thomas Gottschlich of the Stiftung Frauenkirche Dresden, helped select these stones and secured the approval of the Stiftung for their use in the UK. 15 Stones were eventually selected and the Dresden Trust had them transported to Arlewas where stone masons prepared them for the Site.

Grant Macdonald Silversmiths was asked to prepare stainless steel plaques to be attached to each Stone, which in the majority of cases carry the names of British and German cities devastated by bombing during World War two. The 12 city plaques are as follows:

These Stones were arranged in a circle in the centre of which is a Dresden Oak gifted by a Dresden friend in the Gesellschaft.

A centre plaque contains the following moving text in English and German:

Just as Coventry has been rebuilt and Dresden has risen from the ashes of the firestorm which engulfed it on 13/14 February 1945, so have the friendship and mutual respect that traditionally characterised British German relations been reborn.

Henceforth may all difficulties between the two countries be resolved with patience and understanding, may their sorrows be shared and their joys celebrated together. In the beauty of nature as in the presence of God, we are all one.

At the eastern end of the circles of Silver Birch Trees,two Field Maple trees were gifted by German and British soldiers and beyond these stands a Maiden Hair Ginko tree also gifted from Dresden. 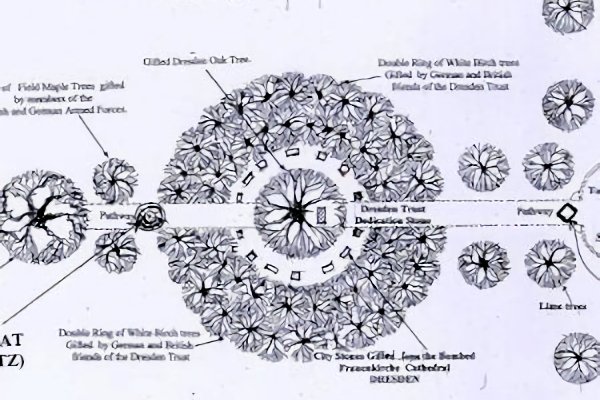