The Making of the Dresden Frauenkirche Orb and Cross

The Board appointed Trustee Peter Nardini project manager for the work. Dresden consultants IPRO provided a detailed history of the Orb and Cross which was translated by Dr Judith Purver of the University of Manchester. This provided an invaluable technical and historical record. Later this was complemented by considerable additional documentation received later from German colleagues, which included some 126 pages of technical specifications and 36 technical A2 size drawings. This was translated and rendered usable by technical translator Gudrun Lawlor, without whose invaluable assistance the project could not have gone forward. Further assistance was rendered by Ken Davis in rationalising the technical drawings to usable computer drawings.

Over a period of several weeks discussions took place with qualified firms of silversmiths and tender documents were prepared: John McCartney of Rolls Royce Aeroengines was helpful in preparing the tendered contract. Six silversmiths expressed interest and each firm was visited, to discuss the scale of the proposed work and to assess the size and scale of the work and the firm’s previous record.

Three of the interested companies requested the full set of tendering documents and the tender was finally awarded to Grant MacDonald Silversmiths who were instructed to start the work immediately, given the desirability of displaying the Orb and Cross on the occasion of the State Visit of the German President to the United Kingdom, the following December.

It transpired that Grant Macdonalds master silversmith, Alan Smith is the son of one of the bomber pilots who had taken part on the raid over Dresden on the night of the 14th of February 1945. The symmetry of the situation was not lost either in Dresden or in the international media, and it consequently raised the already considerable interest in the project.

Work began in July 1998 in Grant MacDonalds workshops, under the instruction that everything had to be hand made, as it had been in the 18th century.

The key components of the overall structure were

The inspection team from Dresden which visited Grant MacDonalds workshops to assess the work in progress found to be more than satisfactory.

Alan Smith – silversmith At the 70th meeting of its Board, The Dresden Trust recorded its deep regret at the passing in November 2012 of one of the Trust’s most devoted members – London silversmith Alan Smith. The son of one of the pilots who took part in the February 1945 raid on Dresden, Alan Smith headed the team (at Grant Macdonald in Blackfriars, London) which made the Orb and Cross for the Frauenkirche. From the first hammer blow on the copper sheet from which these were moulded, he undertook this work with devotion and skill, with heart as well as hand and won the respect and affection of the people of Dresden. Inspired and moved by his father’s remorse about the destruction and loss of life in which he had unhappily been involved, his name will long be remembered. 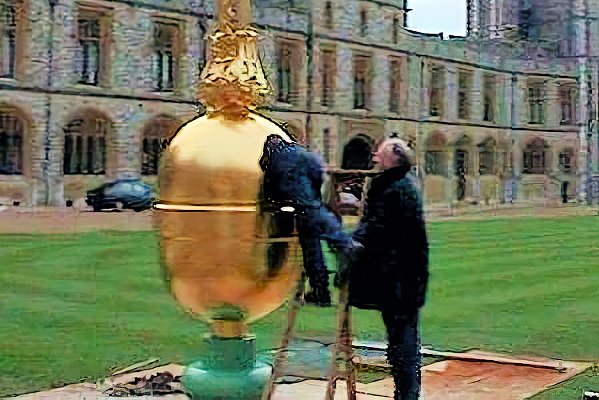